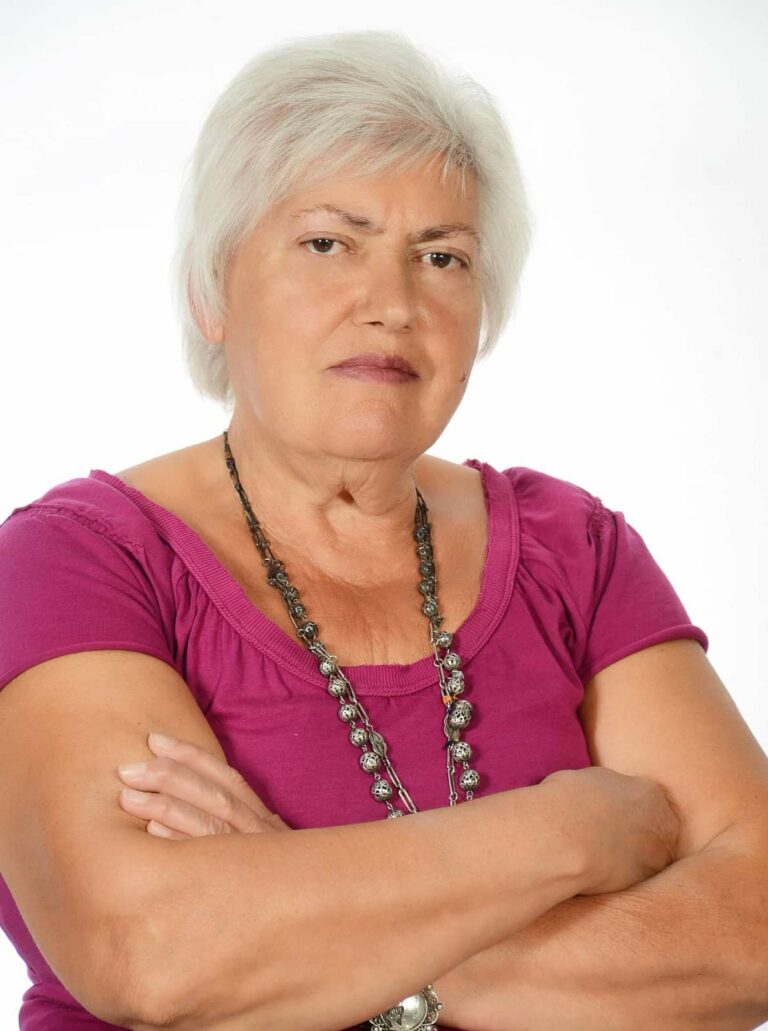 – born in 1945 in Prishtina, died in 2022 – was an academic painter. Vokshi is most renowned for her expressionist portraits. She is the first woman in Kosovo to take up painting as a profession. In 1968, she graduated from the Painting Department, in the class of Nedeljko Gvozdenović, at the Academy of Figurative Arts in Belgrade, Serbia. In the same year, she became a member of the Association of Figurative Arts of Kosovo. In 1978, Vokshi spent an academic year at the Académie de la Grande Chaumière in the class of Yves Brayer, Paris, France. Three years later, in 1981, she received her master’s degree from the Academy of Figurative Arts in Belgrade. From 1974 to 2015, Vokshi taught painting at the Department of Graphic Design at the University of Prishtina. Vokshi’s works can be found in the collection of the National Gallery of Kosovo and the National Gallery of Art of Albania.

I went to Pedagogical High School for two years. Then my professor saw that I was painting very well, he was from Montenegro, and he told me, “You should definitely go to Belgrade to continue your studies because you are painting so well, your portraits…” and I went to Belgrade. When I went to Belgrade to take the entrance exam… we worked for one week with colors, drawing, with… and in the end, I passed the exam. It was a big joy for me. All the professors came to me and asked, “But your paintings…” One of them was a painting professor there, she asked me, “You have something very special, keep it up, you are painting very well.” Another professor from Belgrade, Zoran Petrović, complimented my portraits, they really motivated me. I was very happy when I passed the entrance exam. It was a great joy for me.

I wasn’t even thinking about going to Belgrade, but my professor, he was the reason I went. My mother said, “There is no way you are going there, you have to stay here and get married. Look, all your friends are married already,” but my father supported me by saying, “You have to go and that’s it!” I did five years of studies. Two years here in Prishtina, three there in Belgrade, five in total. At the beginning of my studies, I had no loan from the government or scholarship. So it was a little difficult. My father always worked, we were four children. He didn’t know what to spend his money on first, to educate us or… the salaries, the income back then were very low. There were difficulties in the beginning, but after getting a scholarship, and a government loan, things got better. I could buy canvases and paint, I could buy drapery, I could buy everything.

Usually, we used the city bus to go to the center from campus. In the center of Belgrade was Hotel Moscow. Near that hotel, I saw a woman of Roma nationality dressed in their traditional costume. They had something special that I liked and asked the lady, “Would you like to come and sit for us at the Faculty of Arts?” She accepted and I took her with me to painting class as an art model. A friend of mine and a colleague said, “You shouldn’t have done this! The professor doesn’t like anyone interfering in his work, in his syllabus. He only wants us to do still life.” But it turned out that it was a good idea to bring an art model and in the end when everybody finished their portraits, the professor was impressed by my initiative. On that occasion, I was evaluated with an excellent grade.1

After  finishing my studies  in 1968, I came back to Prishtina, and a professor from the Teaching School, Engjëll Berisha said, “We have an open call, we need a painting teacher.” I applied and got accepted. I started working in the Teaching School in 1969. There I worked a lot with students. My students were really good, even nowadays when they see me they are all like, “Professor, professor!” They are fantastic, they are really good. I worked there for a while. Then I started at the Academy of Arts, and I continued working there. During the school year 1969 – 1970, while working in the Teaching School I produced many works and opened an exhibition in the foyer of the People’s National Theater. I had several exhibitions in the foyer of the Theater and this was to me… many, many, many good things happened to me in the Teaching School, as well as when I came to the Academy with my students. My students also helped me a lot with the conversations we had. Now all of my students are professors at the Academy of Arts.

So I started painting in the studio, I would paint… I would take my art models to the studio. Once I saw an old man from the village, a villager with a horse carriage. It was so interesting to me, and I thought that was a good subject to paint. I asked him, “Can you come to my studio, I want to do a portrait of you?” “Yes.” He agreed to come with me in the studio, though he was very tired. He wore a white plis (a traditional white conic hat). His plis was drenched in sweat and was no longer white. I painted his plis with a darker color, not pure white, because it wasn’t white due to the hard work and sweat.2 Most of the people liked it… and it was very interesting. At the exhibition opening, a visitor said to me, “This is very interesting, I can see that he is a hardworking man just by looking at his big hands, that…” To this day, it still remains one of my favorite portraits and I have it in my private collection. That one is not for sale nor will I give it as a gift.

Portraits were for me, portraits. Yes, portraits and only portraits. Back when I was studying at the High Pedagogical School, the professors instructed me, “Do portraits because you do them very well.” I want to single out my mother’s portrait, where I decided to draw bigger hands, her palm of her hand. I wanted to point out that she was a hardworking woman, a diligent woman, who with her bare hands, out of nothing created many great and beautiful things for us children. 34

As my art practice evolved I wanted to go outside the walls of my studio and out into nature, and have the art model as the main object of study. Life-drawing in nature. I used to do lots of life-drawings and what I liked most was drawing art models in movement. The art model in movement intrigued me the most, not just the static aspect of it. The lines in these life-drawings, almost all of them moved diagonally. In this series, the art models were never real. They were imaginary. They were in my head and as such, I painted them on canvas.

Then in 1977, there was an open call to specialize, because back then we would go to specialize. I applied and got accepted to go to Paris, I left my children… I left my late husband, doctor Bylbyl Shehu. He was a pediatrician, and two of my daughters, Arta, was six years old. I left her at the time when she had just started school and the other girl, Visare, was four years old. I think that no Albanian woman did this, it was not in our tradition to go and leave your children and husband, but I went. And I went there, my brother instructed me and showed me the way because he was previously in Paris and he knew, because he finished Film Editing in Paris.

My favorite writer is Emil Zola. In one of his novels, In the Paradise of Women, he describes a family when they first see Paris: “A woman with two children, with a brother and a sister went to Paris from the village after the death of their father, and they went to their paternal uncle’s and when they entered Paris, when they entered Paris, those centers, they were in awe…” When I read that I identified with it when I went for the first time in Paris. All those things, those streets, when I read that novel, it felt like it was talking about me because the same thing happened to me, my brother sent me there, and I looked… wow… That novel was really interesting, because the same thing happened to me, just like in Zola’s novel In the Paradise of Women.

During the 1999 Kosovo War, we remained here, my late husband and I. Our daughter went to North Macedonia together with everyone else. The nights were very difficult, and I remember that only the moon provided us with some light, at a time when there was no electricity. My mind was very active. I made a painting with a single brush stroke on the canvas. I tried to express the feelings that I was having about the war that I was experiencing.5 During the war, I saw on television a massacred corpse. That image is buried deep in my memory. It was terrible. Later, after the war, I decided to paint that image. The massacred man had a broken arm and was left out of the composition. That image resurfaced very suddenly and I painted that arm with a single brush stroke, but this time that arm was strong and powerful, and it showed the pride and pain that our people felt during the war.

The artist statement was largely based on an oral history interview conducted with Alije Vokshi on July 4, 2014, by Jeta Rexha, and published on www.oralhistorykosovo.org; and a radio interview conducted by Flora Durmishi published in Alije Vokshi’s exhibition catalog held at the Gallery of the Ministry of Culture – Qafa in 2018. The artist statement has been sent for confirmation and approved by the artist’s daughter, Visare Shehu Selimaj.